This is the Sandbox tree. Its trunk is covered in strong pointed spikes that come in varying degrees of size depending on the tree. It’s also sometimes called “Monkey-no-Climb” because, well, obviously, it would be inadvisable for a monkey to climb it. You might also hear it referred to as the Dynamite tree. This name is derived from the fact that its seeds are enclosed in pumpkin-like capsules (the fruit) that explode loudly shooting the seeds with enough force to injure anyone or anything foolish enough to be standing too close. (And by “too close” I mean less than 100 yards away.) 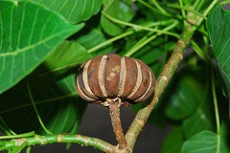 While the fruit of this tree is reportedly tasty, its seeds, if eaten, will make you very sick. If all of that weren’t enough, this tree also comes with poisonous sap that is used by some natives of Central and South America, where this tree can be found, to incapacitate fish and even some mammals.

I really don’t see how the Sandbox tree could be any clearer in its desire to be left alone. It seems to me that the wisest course of action would be to accede to its wishes and leave it be.